My first reaction upon finishing Yoga PH.D was to ask – what remains to be said? Carol Horton has written the definitive book on the “paradoxical multidimensional” practice that is contemporary yoga.

With one foot in Eastern mysticism and the other in a Lululemon store, Horton’s covered it all – yoga’s history as esoteric tradition, its assimilation into 20th century fitness routines, and its current incarnation as “crassly commercial industry”.

But it is her personal story of transformation from skeptical academic to devout yogini, that brings this sociological history to life. Horton asks “How did I, a scholar dedicated to the “life of the mind” (as it was ubiquitously referred to in grad school) become passionately dedicated to writing a book inspired by the wisdom of the body? Ultimately the answer is simple: I followed the prototypical paradoxical path of yoga today.”

And herein, lies the power of Horton’s narrative, because it is a microcosm of our transpersonal journey. Her story, she reminds us, “is simply an iteration of many others” who began looking for “stretching and stress relief” but soon find themselves disciples of the “contemporary spiritual movement” known as yoga.

Horton describes the path of conversion. “All that talk I’d heard about mind-body-spirit integration – which had seemed woozily New Age-y to me … became more and more compelling”… Yoga was opening new realities to me, taking me places that the purely rational part of my brain, which I had cultivated so assiduously for so many years, couldn’t go on its own.”

And herein lies the heart of the tale. Because like so many of us, Horton was “flush with the astonishing realization that yoga was having a transformative effect on my life” yet she found – she could not even begin to say how or why. What was yoga really? Where did it come from? How did it work?

“The most common explanation I’d hear vaguely invoked by teacher or in yoga magazines was that yoga works because it’s an unchanging spiritual practice developed thousands of years ago by all-knowing seers in India and handed down to us through the ages.”

But Horton found this “fuzzy belief that we’d somehow been initiated into a timeless yet ancient lineage utterly unconvincing. It seemed self-evident that yoga was far too in synch with contemporary culture to have been directly imported from such a radically different time and place.”

And so through this desire to better understand her experience, both as Professor and Yogini – that Yoga Ph.D. is born.

Now obviously, I can’t even begin in this blog post to cover the panoramic scope Horton achieves in these pages (yoga history and mysticism, somatic psychology, alternative medicine, new age spirituality, not to mention powerful economic forces promoting the commodification of the body) so I’m not going to try. But I will (at the acknowledged risk of gross over-simplification) try to share just a few of the enlightening observations she makes on her journey of yogic discovery.

In Part 1. Historical Reflections: Ancient and Modern, Horton begins with the facts. Yoga is no sacred time-worn practice but a secular modernist invention. While the traditions of yoga are indeed ancient (some early precursors going back thousands of years) the postural based practice of today is at best, a distant relation.

But Horton’s insight is not to reject contemporary yoga as a fraud. Horton argues that the core practice of asana, as developed by Indian gurus of the late 19th and early 20th century revolutionized yoga “from an esoteric discipline that could only be learned through a guru-disciple relationship into a spiritual technology available to all.”

No longer about achieving freedom from the karmic wheel of rebirth, or transcending or escaping the body, modern yoga was an “uniquely Indian expression of an international movement” that saw the body “as a potential site of integrated physical, psychological, and spiritual development.”

Teachers like Vivekananda and Sri Tirumalai Krishnamacharya  merged ‘ancient’ yogic wisdom with gymnastics, calisthenics and body building routines, to create a new body based yoga “designed to work with and through the body in ways that responded to the newly self-alienating conditions of modernity”. They forged new accommodations between science and spirituality that Horton contends, made yoga “relevant to our rapidly industrializing, globalizing world.”

In Part II, Personal Reflections: Yoga, Psychology & Spirituality, Horton theorizes “In a society where many, if not most people feel disconnected from their own bodies, asana reconnects us to the multi-dimensionality of our own physicality.”

She explores how yoga, as originated by these 20th century masters and their disciples (such as Iyengar and Desikachar) works to systematically “integrate the life of the mind and the wisdom of the body”.

In the chapter titled Handstand Psychotherapy: Integrating Body/Mind she writes how struggling with Pigeon pose helped release subconscious memories and repressed emotions, and how mastering Handstand encouraged her to move past self-imposed fears and limitations.

In Burning off Karma to Be a Better Mom, she tells how years of continual practice have allowed her to approach a state of witness consciousness. “I can practice letting go of my self structured whirlwind of preoccupations and opening up to the world around me at any time”…”Whether or not we call this deeper experience spiritual is inconsequential. Instead, what’s significant is that it occurs – and quite regularly at that”.

“My yoga practice, I realized was like a strand of pearls threading through my days. In my mind’s eye I saw the slow, ongoing process through which each small moment of internal stillness and spaciousness I’d ever experienced on the mat connected to the next.”… “On good days, I touch it for guidance. On bad ones, I see it glimmering faintly, far away in the dark.” 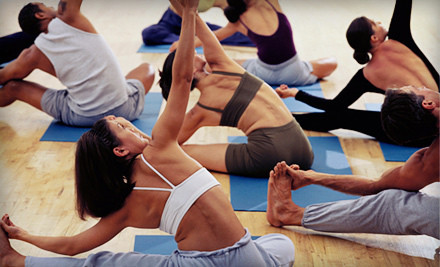 The power of Horton’s luminous words ring true, I suspect, for many of us. She certainly speaks for me when she concludes that whatever contemporary yoga is – she is amazed to find that “this combination of physical movement, conscious breathing and mental focus featured in contemporary asana practice allows me to experience the magic of the present moment more consistently that anything else I’ve ever encountered.”

In Part III Sociological Reflections: Yoga & American Culture, Horton reflects that “Some people are convinced that yoga works because it taps them into some special source of ancient Indian wisdom. Many attribute its effectiveness to their particular method or teacher, swearing by the rigors of this or that system, or the wisdom of this or that guru like leader. Some, more cerebral types, believe that sooner or later, neuroscience will give us detailed explaining by mapping the complexities of the brain.”

But the way Horton sees it, there is no one answer. Yoga is inherently paradoxical. We can’t reduce it. It is East and West. Ancient and Modern. Traditional and Revolutionary. Physical and Spiritual. Scientific and Esoteric, Rational and Extra-rational. 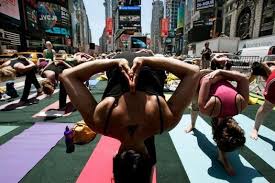 Yoga is a “simultaneously generative mix of the sacred and the profane”…“ a modern invention with ancient roots, a fitness fad with spiritual sustenance, a 6 billion ‘industry” with non material values”. And it has reached millions of people because somehow it “simultaneously speaks to the ordinary concerns of everyday life and offers a bridge beyond them.”

One of my favorite moments in the book is when Horton writes of finding herself in deep meditation with a group of Midwestern woman in a “cookie-cutter conference hotel perched on the edge of two intersecting free-ways”…“After we’d finished I looked around the room of with new eyes. The soulless generic-ism of this corporate space with garish wall to wall carpeting was infused with a new sense of possibility. The women around me glowed with a softer aura, as if lit up from within. And for a moment that felt both long and short, at the same time, there was a deep sense of quiet”.

So to end this post, I reiterate it’s beginning. Really, what remains to be said? Other than this – “I look around, and notice that light looks brighter. Even the shadows are more rich and resonant. I feel a frisson of magic in the air that my everyday mind hadn’t believed to be there. I get a glimpse of the realization that despite everything, the world really is full of richness, beauty and wonder.”

Thank-you Carol Horton, who could have said it any better?