“If we look around us for a moment, we will find people everywhere with back problems; we live a one-sided life when we neglect the body and the spine.”  Judith Harris, “Jung and Yoga: The Psyche-Body Connection”

Probably the most common injury/issue I deal with as a yoga teacher is low back pain. While there are plenty of good physiological reasons for this state of affairs (i.e. sitting all day at computers) I’m coming to believe that psychological factors play the bigger role. In fact, after reading Judith Harris’s book Jung and Yoga: The Psyche-Body Connection, I’m coming to think that our current epidemic of ‘bad backs’ boils down to a spiritual disorder.

Harris is a Jungian analyst and a yoga teacher who sees the bodies ‘symptoms’ as metaphors for our inner state. Our posture, whether we are slouched in defeat or tall in victory is largely unconscious, yet it reveals much about who we are. Harris writes “In body language, we can think of the potential to experience life as resting in the spinal column, itself the backbone of life”.

The spine is the first structure that forms inside the womb. From here, everything, body, limbs etc. take root. The spine literally supports us from behind, yet in our progress oriented “getting ahead” world, we relentlessly move forward, relying solely on the front of our bodies. One of western culture’s most common postural problems is our tendency to thrust our heads (our minds?) ahead

the rest of the body, throwing the spine out of alignment.

Harris’s work explores an idea laid down by the one of the great forefathers of modern psychology, Carl Jung. For Jung “behind’ symbolized the region of the unseen, the unconscious. And Harris sees low back pain as symptomatic of our unconscious disconnection to our spine and backbone (and everything it represents). This has left us unstable “without roots, to where we have come from, to the moment, to where we are headed in the future.”

t in Hatha yoga the spine was seen as the center of our sacred anatomy. It was considered the microcosm of the Axis Mundi, the pillar that supports the world. This pillar was seen as the axis between Heaven and Earth, and was paradoxically in constant motion while being motionless at the center. Harris writes “This implies one of the most important goals of yoga; to bring the body and mind into stillness in order to experience the inner world.”

The spine was also likened to a mountain. Tadasana is the name of the basic standing pose in yoga and brings together the Sanskrit word for mountain and the word asana meaning posture or pose. “In Tadasana, we stand like a mountain with a huge firm base beneath our feet, at the same time, in the upper body we are striving upward to achieve a feeling of expansiveness, while constantly maintaining a position of utter stillness.”

The spine actually divides, at the waist, just above the sacrum, to make this elongation possible. In Hatha yoga this lengthening and stretching of the sp

ine was critical to spiritual development, opening the body to the free flow of life force energy (prana) stimulating power centers (chakras) and pathways (nadi’s) and ultimately allowing spiritual energy (kundalini) to rise up from the tip of our tailbone to the apex of the brain.

The sacrum is a curved bone which consists of five fused vertebrae, it is the foundation of our spine, it roots and supports the entire spinal column. 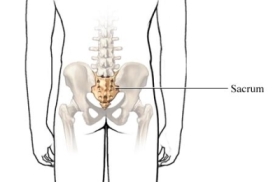 hen we stand in proper alignment, the force of gravity passes down through the center of head to backs of knees and ankles making the sacrum the literal center of gravity in the body.And according to Harris this makes the sacrum the” focal point of our relationship to the ground, the body and to our human reality.“

The sacrum, as center of gravity, is the fulcrum of opposing energies. ”Gravity will draw feet into the floor, giving us the anchor that we need to live in the world” yet it is “counteracted by the tendency of living things to expand and grow upward toward the sun.” So while we take root there must also be a counteractive force (in fact no muscular movement is possible without contraction) that moves us upward toward the heavens and spirit.

Hatha yoga calls the sacrum a sacred or holy bone, because it is the center of the divine body. Because it literally connects the lower half of our body to the upper half, it is seen as a place of transformation, where the union of upper and lower, of above and below, of the divine and the human occurs.

That’s why I find it fascinating that most of our lower back issues are rooted in this ‘sacred’ area. Telling also, is the fact that for the vast majority of back pain cases, a specific physiological cause or source will never be identified. Have we, as Harris asserts, become so ‘frontally’ directed towards getting ahead, that our back, the sacrum -our root and center – has fallen into the dark, the unconscious? Have we forgotten the necessity of balancing heaven and earth, of finding both the sacred and corporeal within ourselves?

I find it revealing that my own lower back problems vanished when I committed to becoming a yoga teacher. This decision marked my step back from an overly rational way of seeing, from materialistic concerns, to believe in well, something – anything. I’ve always thought my back pain faded because I re-educated my body through training in proper alignment, but now I’ve begun to wonder if it wasn’t my commitment to a more spiritually oriented life that ‘cured’ me. 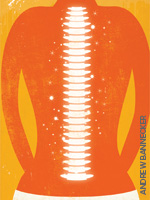 The word sacrum comes originally from the Latin word sacer, meaning holy or sacred. So to conclude, I ask those suffering with low back pain to ‘drop down’ into this sacred area, your center of gravity, while simultaneously reaching up with the crown of your head, towards the sun and the heavens. Consciously come into alignment with the axis mundi, the center of the cosmos and the center of yourself.

You’ll be glad you did. Because as Harris writes “ The strength that comes from being rooted is inexpressible in words. Whether standing sitting or lying down we feel the immense support of something holding us from below, which in the end is absolutely irreplaceable.” So I invite you to physically root – and take flight – in full consciousness of what your spine, your support, your backbone represents – your root in the material world and your connection to the divine.