If you don’t think yoga is a feminist issue try suggesting as author and feminist historian Vicki Noble does, that women invented the ancient practice. Noble’s assertion defies the common myth that women were not allowed to practice yoga until the past century. But as Tantric scholar Ramesh Bjonnes writes “women have been gurus, healers, yoginis, and Goddesses since the beginning of time”.

Today the majority of yoga practitioners are women. While fair access to downward dog might seem on the surface like a feminist victory, Noble and other feminist researchers tell a very different story. They ask – why are women still practicing a form of yoga developed by men – only for men? In fact, their research is uncovering evidence of an alternative, much more ancient female centered yoga practice that preceded the Vedic yogis by thousands of years.

Noble’s research into what she called the “female blood roots” of yoga suggests there was a widespread female-centered communal yoga practice dating from the upper Paleolithic and Neolithic. Celebrating the natural powers of “bleeding, birthing, healing and dying”, this early yoga was practiced in rituals of trance and dance. In this way disease was believed to be purged from the community and fertility in women, animals, and food crops enhanced.

Noble points to the images of female Buddha’s and high-ranking shaman priestesses which are so pervasive in the artifacts and figurines of Old Europe and Asia(6000 BCE). She proposes that the varied poses shown in these early sculptures, as well as frescoes, murals, and rock art through the ages, are expressions of an ancient shamanistic yoga eventually codified into the formal schools we know today.

Noble believes these cross-cultural sculptures, seals and figurines depict women in body postures startlingly similar to yoga asana. Many show women seated with eyes closed, legs crossed over one another or standing feet together with arms raised. Some wear waist necklaces and beaded hip-belt over their pubic area, resembling later images of Indian Yoginis or Tibetan Dakinis. Noble writes “although such figures predate the formal codification of yoga in India by many thousands of years, each of them could be said to graphically depict steps of yoga that lead to “progressively deeper levels of awareness and functioning until, finally, ordinary consciousness is transcended in the bliss of ecstasy.”

Monica Sjoo is another feminist historian who has written extensively about the history of women’s yoga. Sjoo claims that the concept of raising Kundalini energy, so  fundamental to yoga philosophy and practice, originated with these yogic priestesses. She points out that many prehistoric figurines show women merged with tree’s, with snakes coiling around their bodies, and emerging from their heads. Were these women raising the serpentine energy (kundalini) up the world tree ( human spine) to achieve ‘wings’ or illuminated consciousness (enlightenment)?

Both Sjoo and Noble argue that the concept of Kundalini originated in the female “Siddhis” (yogic powers) of menstruation, female sexuality, natural birth, and menopause. Noble believes these ancient yogic rites encouraged the free, spontaneous flow of kundalini energy through the female group, and by extension, throughout the entire community.

Today yoga scholars generally agree that the discovery of a seal in the Indus Valley (depicting a man seated in what we would now refer to as Lotus posture) is the first historical reference to yoga. But there are many similar seals and figurines depicting women in ritual body postures – and many of them much older. As Uma Dinsmore-Tuli writes in her book Yoga Shakti: A Guide to Women’s to Power and Freedom Through Yoga and Tantra “ ”The fact that most of the figurines unearthed in the Indus Valley were female is the Indian link from the matriarchal Paleolithic civilizations to the prehistory of yoga.”

Modern yoga is acknowledged to be largely derived from the Hatha tradition, but the roots of  Hatha reach further to Tantra.  Scholar Ramesh Bjonnes writes” …if we talk about yoga as practice, as spiritual technology, its source is ancient, prehistoric Tantra, not the Vedas… it seems compelling that yoga emerged from Shamanism rather than from the priestly Vedic tradition, as most Western yoga scholars believe.” And ancient prehistoric Tantra dates back to the female centered shamanic practices of prehistory.

Miranda Shaw is a historian on the female roots of Tantra Yoga. In her book Passionate Enlightenment she describes the remains of round, open-air stone temples still found in India where animal-headed statues of dancing women, stand as a reminder of these yogini’s ecstatic rites.

Shaw writes how yogini’s gathered at feasts to play “cymbals, bells, and tambourines and danced within a halo of light and a cloud of incense.” Within this nocturnal congregation, “a circle of yoginis feasted, performed rituals, taught, and inspired one another”. They sang “songs of realization” regaling one another “with spontaneous songs of deep spiritual insight.”

The magical potency of Tantra was transmitted by a female line “power-holders” – a mysterious sect of women called the Vratyas – and they were not an isolated case.  Taoist Yoginis from China and Dakinis from Tibet were also powerful spiritual teachers, giving empowerments and initiations.

Female Tantrics were called by many names, Dakinis (woman who flies) Vidyadharim (knowledge-holder) Vira (heroine) but the most common term was Yogini (keeper of the occult secrets). So who were these women – and why do we know so little of their history today?

Noble, Shaw and Sjoo agree that with the advance of patriarchy, the ecstatic techniques of women were gradually swallowed up by the more ascetic practices of men. In seated meditation, the transcendent was sought not through the body, but through the practices of mind. Women and their biological functions came to be negatively equated with the life of the body and soon female rites were outlawed altogether. Yogini’s and dakini’s became “witches,” “ogresses,” “demonesses,” or “temple harlots”.

But their teachings, as Sjoo and Noble contend, were not extinguished – they were co–opted to become the new “secret” knowledge of a new spiritual elite, the Brahmin priesthood. And over time we forgot there was once a different kind of yoga. One in which the inherent powers of the female body were celebrated and harnessed for illumination, freedom and compassion – and the benefit of community.

Noble believes yoga is a feminist issue because until we understand women’s central role in the development of yoga, it cannot be a truly effective female practice. Noble teaches what she calls Lunar Yoga, a yoga tuned to the ancient lunar calendar and the natural cycles of women. Here the focus is not on perfecting yogic postures but on experiencing energy “flow”. She urges women to reclaim the “natural, biological ways of accessing and experiencing the yogic power of our ancient fore-sisters”.

Noble writes although the idea of woman’s yoga ” might appear to glorify the female at the expense of the male, or capitulate to a worn-out 1950’s idea that “biology is destiny,” it actually does neither.” Instead it seeks to acknowledge the “dynamic quality of ecstasy that especially seems to mark the female-centered yoga experience.” It seems Noble’s call is being heard. More and more we reject a view of the body as defiled, coming into alignment with an ancient feminine view of the body as sacred, a vessel for the divine. 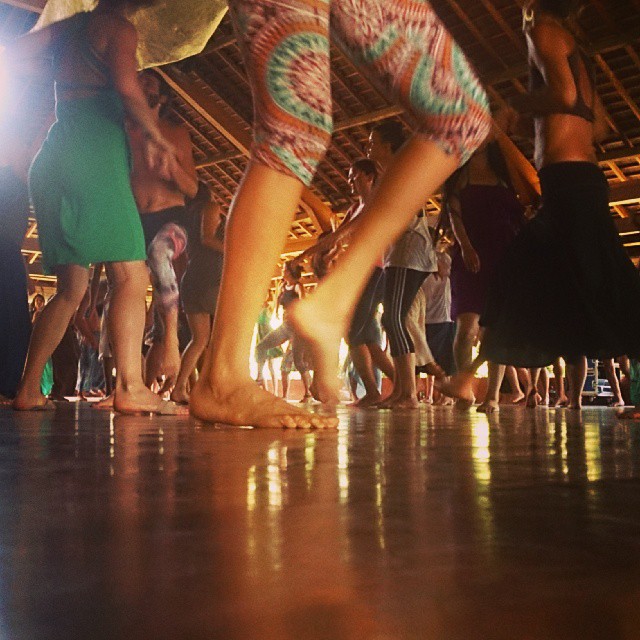 So as we gather in communal classes, I wonder if our practice of yoga can become, like the practices of our ancient ancestors, a ritual of blessing and healing within the community? According to Noble, the legacy of the ancient yoginis can be “activated in the here-and-now to bring balance and renewal to our community through our delight in the powers of the physical body.”

To me this seems like a yogic heritage well worth keeping. So I just don’t get why, despite the recent spate of articles and books exploring the historical roots of yoga, so few mention women’s contributions. Why is it that the current debate amongst yoga scholars regarding the true historicity of yoga (is it 5000 years old or just 500) barely takes into account the legacy of ancient yoginis? I find this blind spot puzzling. I can’t help but wonder, in this so-called post feminist era, if yoga really has “come a long way baby”?